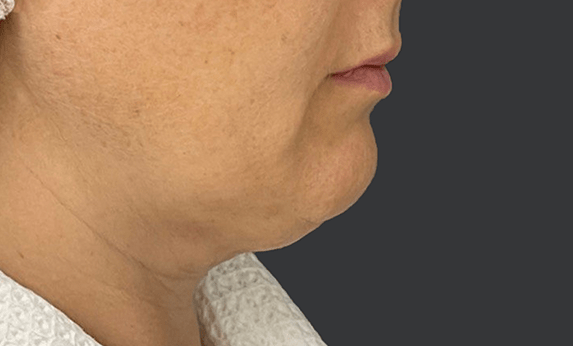 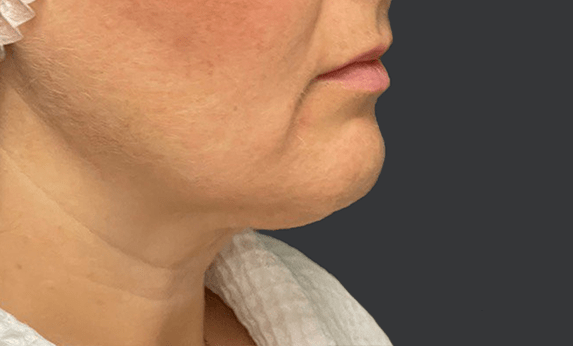 A double chin is a fairly noticeable aesthetic defect that makes the oval of the face blurry, and the face itself is heavy and five years older. This problem is observed in both men and women. In addition, there is an opinion that only obese people have a double chin. But this is not true The second chin in thin people can be seen just as often.

Reasons for the appearance of a second chin

The second chin is a skin fold with or without excessive accumulation of fatty tissue in the lower jaw. The reasons for this problem are following:

Can I remove the second chin with exercises?

By going to any forum on cosmetology, you can find numerous videos about how at home, doing massage with a towel or special exercises (face building), you can get rid of a double chin, do a lift, cheek lift and solve other aesthetic drawbacks. Unfortunately, these methods are ineffective.

Moreover, these exercises in the fight against a double chin do harm. Since they lead to hypertonicity (muscles of the neck). This, in turn, leads to the formation of additional skin lines and wrinkles, which greatly add to the age.

How to get rid of a double chin: procedures with proven effectiveness

So, the question that interests a lot of people: how to get rid of a second chin, if its cause is fatty deposits? The choice in favor of this or that method of treatment is made taking into account the cause of the second chin.

If indicated, a plastic surgeon can perform the following manipulations:

In the clinic, a cosmetologist can offer such corrective procedures:

Removing a double chin with cryolipolysis

French medical cryolipolysis Cristal with AGATE attachment is an apparatus procedure that allows you to get rid of fat deposits at the chin forever. This happens due to the destruction of the fat cell wall by cold (minus 7-9 degrees). Its content is released into the pericellular space and within 1-2 months is excreted by the lymphatic system of the organism.

Cold has a positive effect on the condition of the skin – it increases the tone and elasticity of the skin. This means that there will be no sagging of the skin on the chin after cryolipolysis.

Cryolipolysis of the second chin is a medical manipulation, therefore it is important to carefully and carefully select the device and the specialist who will be performed. The ANACOSMA clinic uses Cristal called cryolipolysis, as its safety and effectiveness has been proven by clinical studies. Only in this device there are 14 highly sensitive sensors that control the depth of penetration of cold and its uniform distribution within the range of action of the nozzle. In addition, the Crystal device has the international certificate of quality of medical devices ISO13485, received the CE medical mark, and is also certified by the European Union. For such reliability, Cristal is the only cryolipolysis device in the world, which has been given the name “medical cryolipolysis”.

On the website of the ANACOSMA clinic, you can find reviews and photos before and after cryolipolysis of our happy clients. The price of the procedure depends on the number of nozzles used.

Olena Vydra
The information has been prepared with the participation of a dermatologist-cosmetologist at the ANACOSMA clinic
Contraindications to cryolipolysis of the chin
pregnancy, breastfeeding;
presence of a pacemaker;
allergy to cold;
disorders of skin sensitivity;
skin diseases in the treatment area. 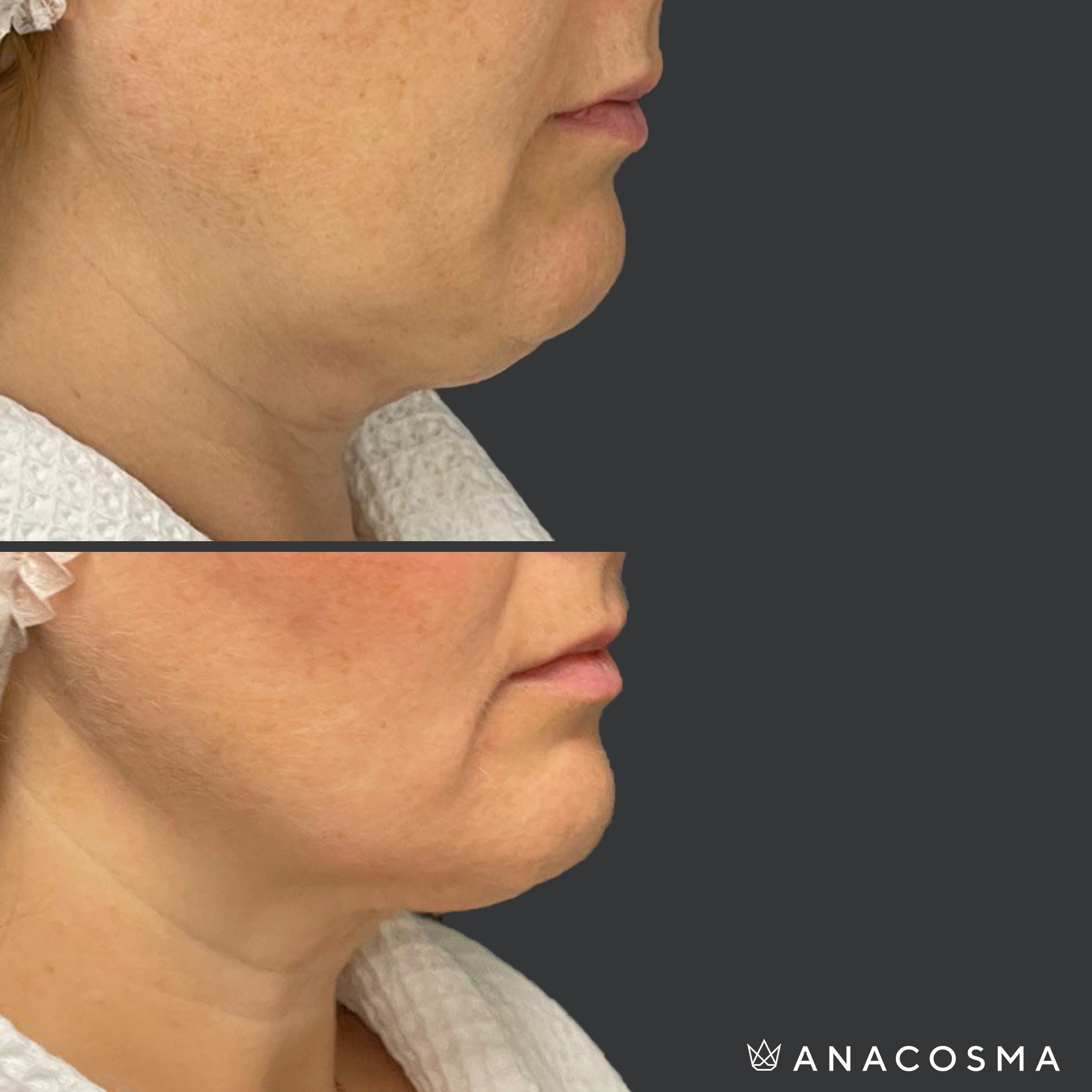 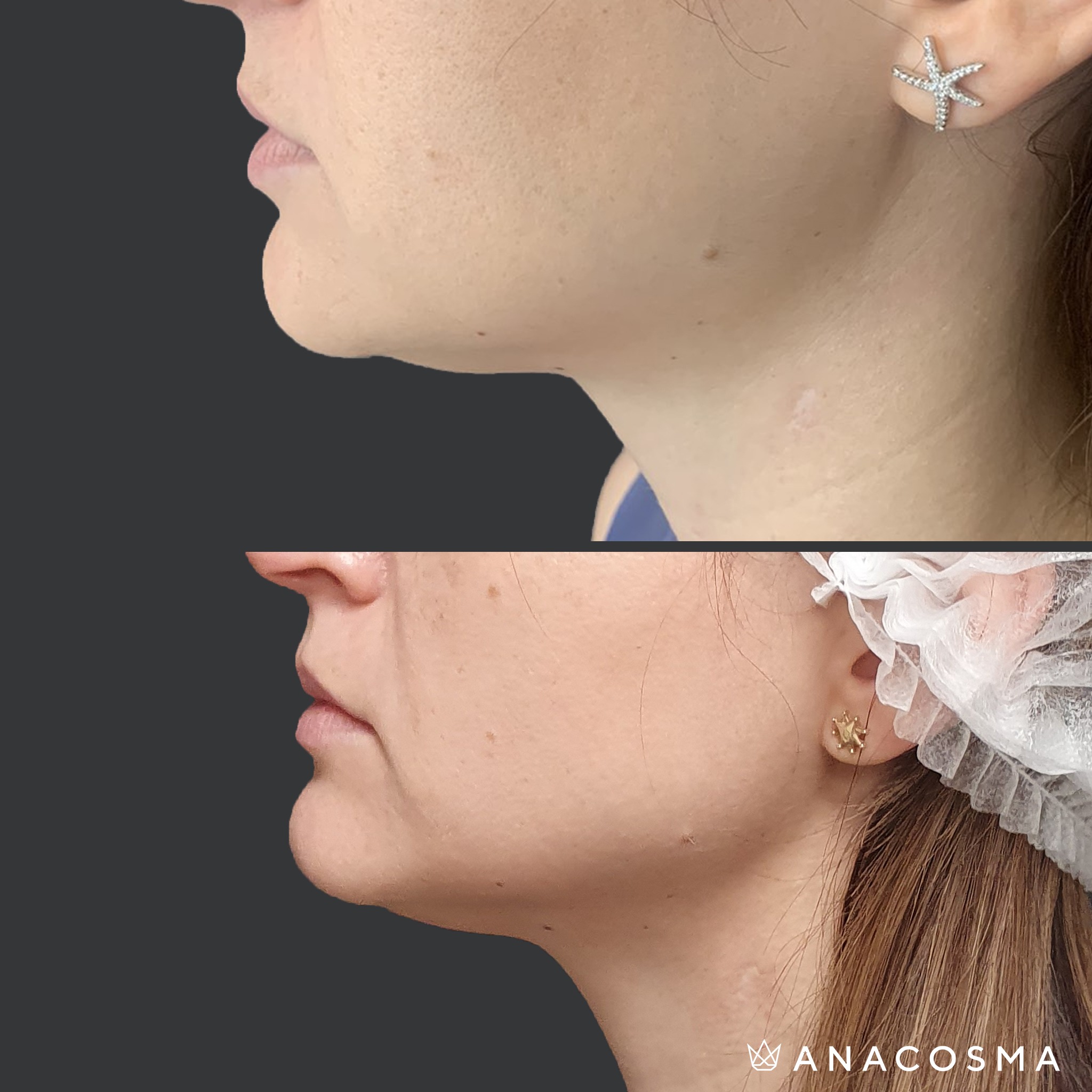 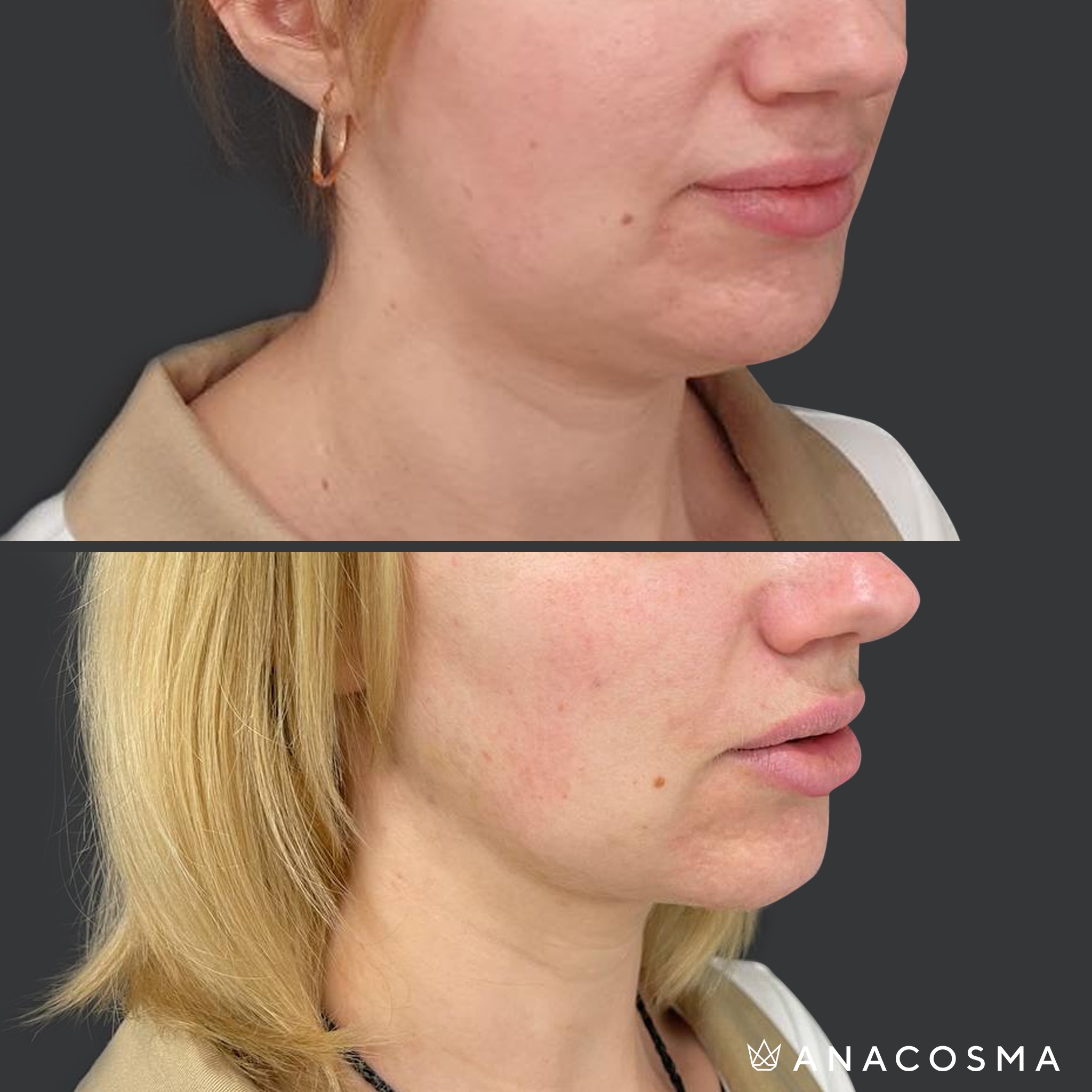 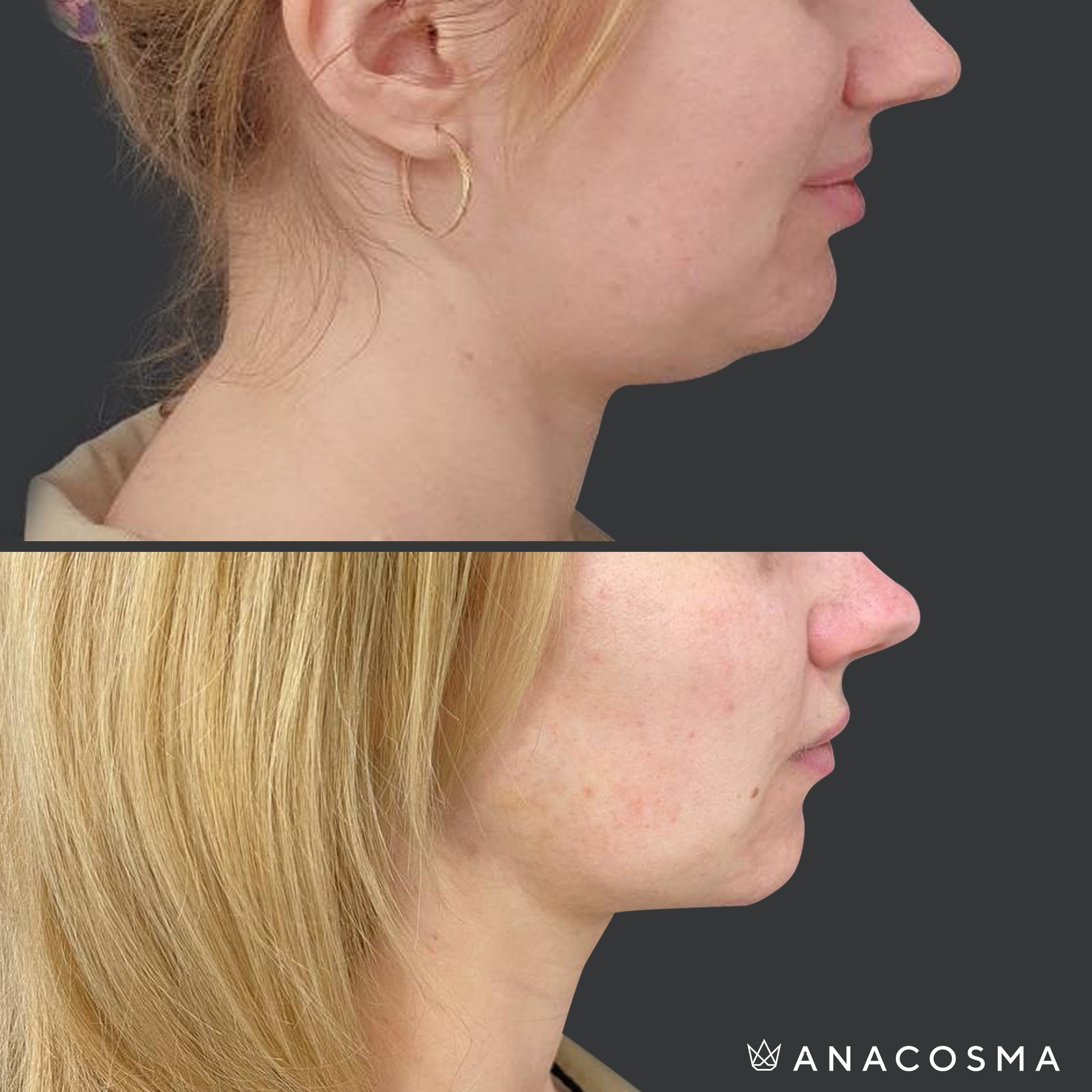 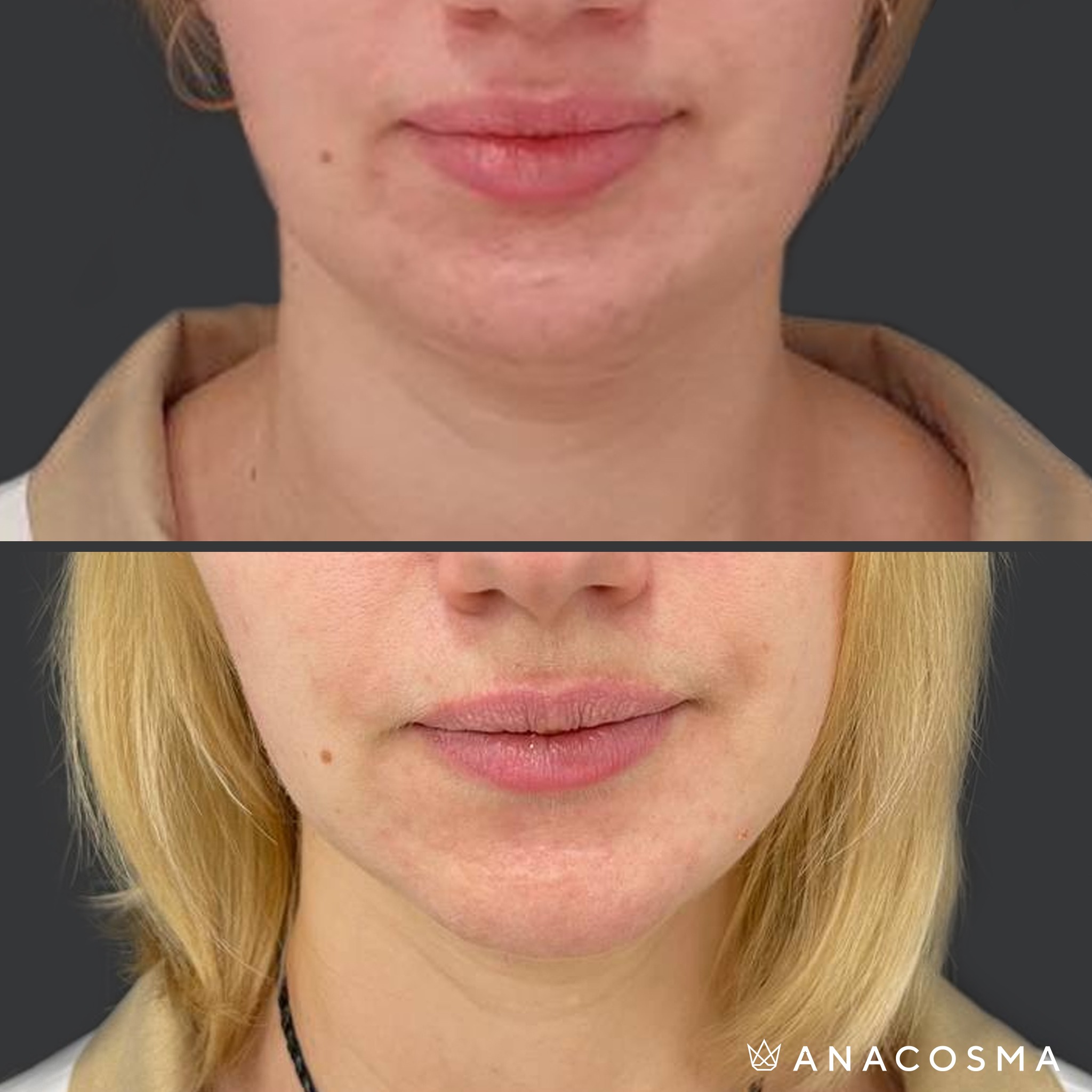 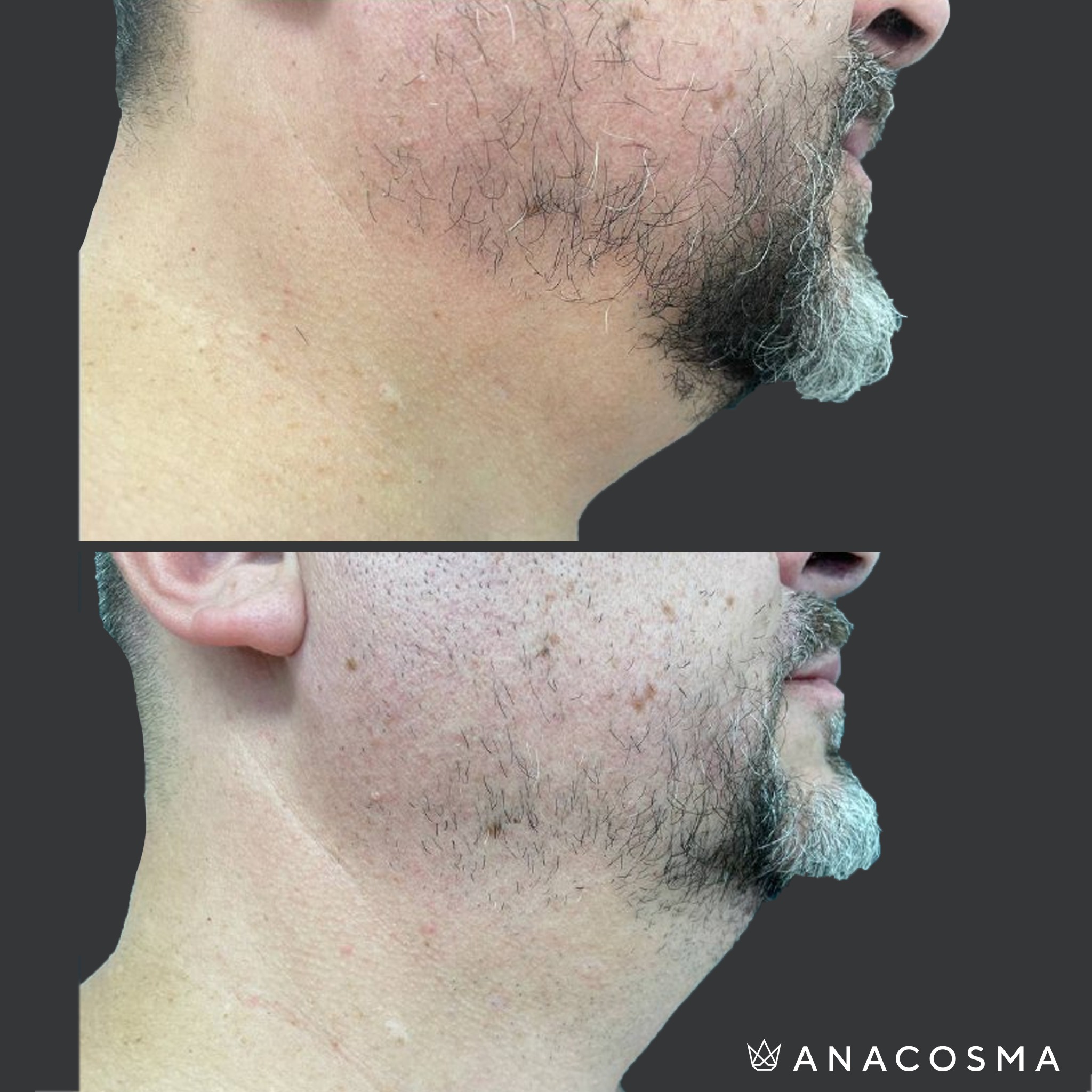 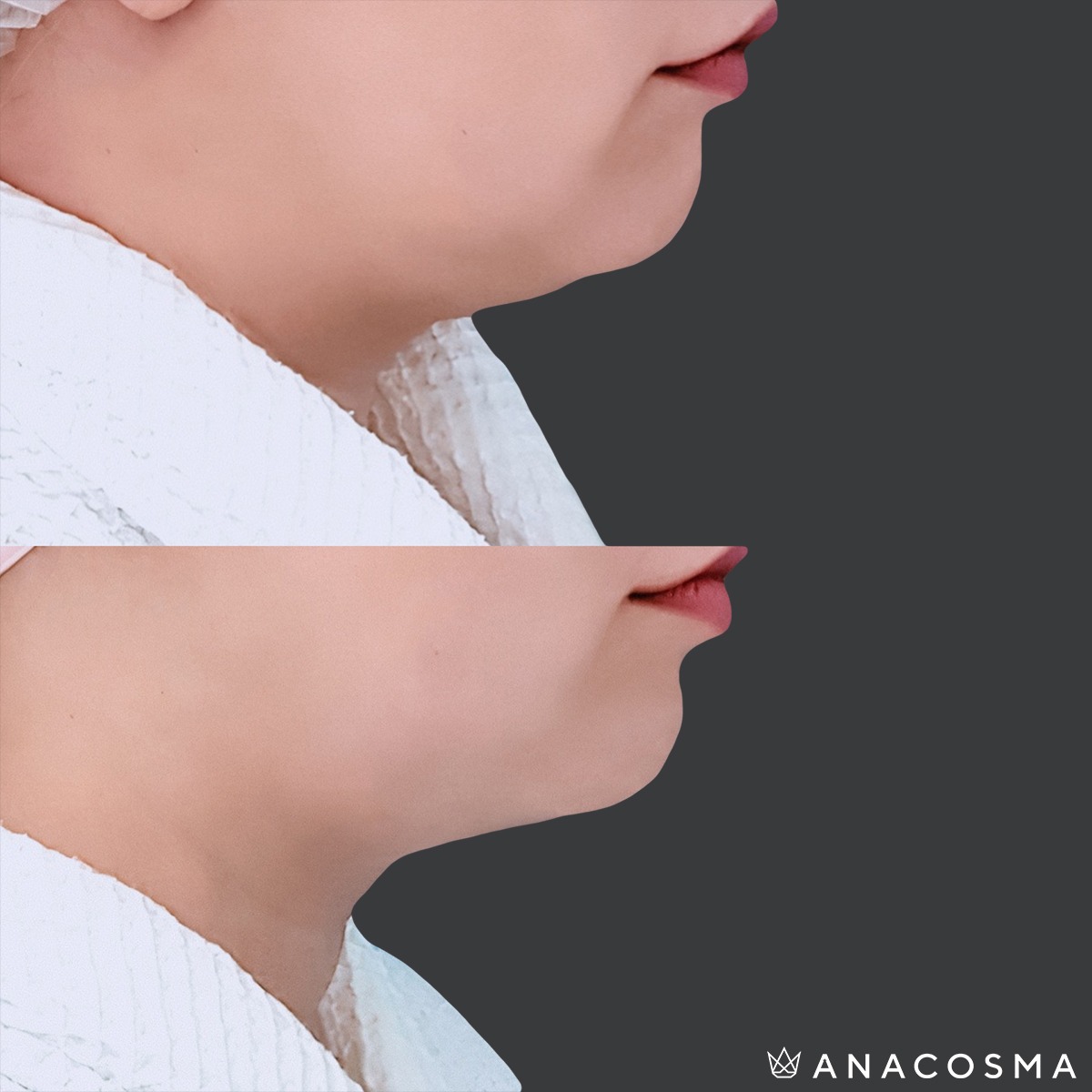 BEFORE AND AFTER
WANT IT
SLIMMING ZONES WITH AGATE

Fat folds under and above the bra

Knees (fat rolls above the knees)
TO WHOM IS THE AGATE SLIMMING PROCEDURE SUITABLE FOR?
testimony
Double chin
"Fat traps" in the knee area
Fat rolls in the bra area
!
result
testimony
+
result
Clear face contour
Slender knees
Beautiful neckline
How is the procedure carried out
1
Consultation

Cosmetology or plastic surgery will help to remove the second chin – the doctor will determine at the consultation. The doctor will examine and interview the patient to exclude contraindications and determine the optimal method or a combination of several methods for correcting a second chin.

2
Carrying out the procedure

There is no preparation for the procedure. Removal of the second chin will take from 1 to 3 sessions of cryolipolysis with the Crystal attachment of AGATE. One procedure takes 35 to 70 minutes.

To freeze the fat on the chin, a napkin soaked in a special gel is applied to the treatment area, which protects the skin from the cold. Next, a cryolipolysis nozzle is superimposed, into which the skin-fat fold is sucked. The machine starts to cool the tissues in the attachment. The procedure is quite comfortable, but when the nozzle is inserted, the patient feels tissue pulling in when exposed to vacuum and a feeling of cold. It dissapears a few minutes later.

After the procedure, there may be a slight swelling, sometimes bruising (depending on the characteristics of the body). In order for these manifestations to disappear as soon as possible, in the ANACOSMA clinic, doctors prescribe an anti-inflammatory cream or ointment and immediately after the procedure they carry out a lymphatic drainage massage. In a week at most, all traces of the procedure disappear.

If necessary, the following procedure is carried out in a month. To quickly lose weight in the chin, they also prescribe drugs that improve the work of the lymphatic system, which removes dead fat cells from the body.

The first results are seen quite quickly — after 3-4 weeks. At the end of three months, the final picture can be assessed.

The result of cryolipolysis on a French device Cristal is saved forever, however, with uncontrolled weight gain, these volumes can be restored due to an increase in the amount of fat cells that are remained.

WHO IS PERFORMING THE PROCEDURE?
CHOOSE A DOCTOR 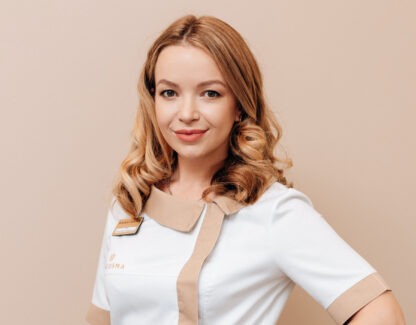 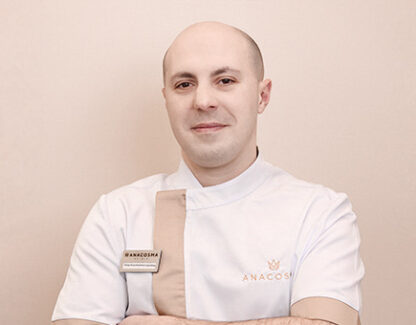 12 years experience
Kostyantyn Shalvarov
Dermatologist, doctor of anti-age medicine
Dr. Gnura is excellent!
Dr. Alexandra is excellent. She explained all of the steps involved and answered all of my questions. She suggested other treatments and products that would help my skin. She is extremely professional and knowledgeable. I immediately noticed an improvement in my skin
Thank you Dr. Oxana!
The best of the best! Dr. Makarenko is the ONLY doctor I ever let touch my face. She has been slowly injecting me over the past 2 years and I look 10 years younger easy! I can not explain how talented this woman is. 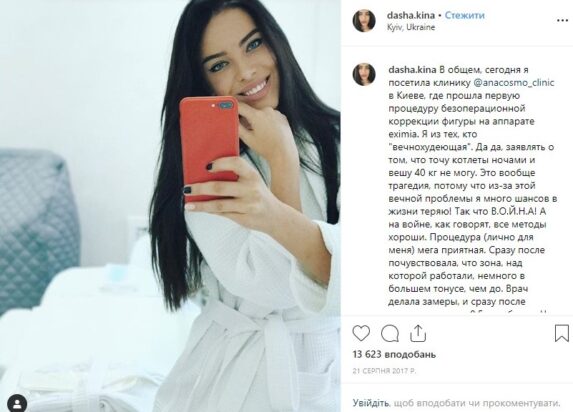 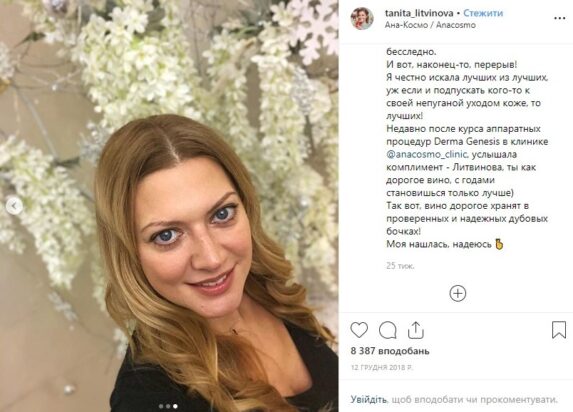 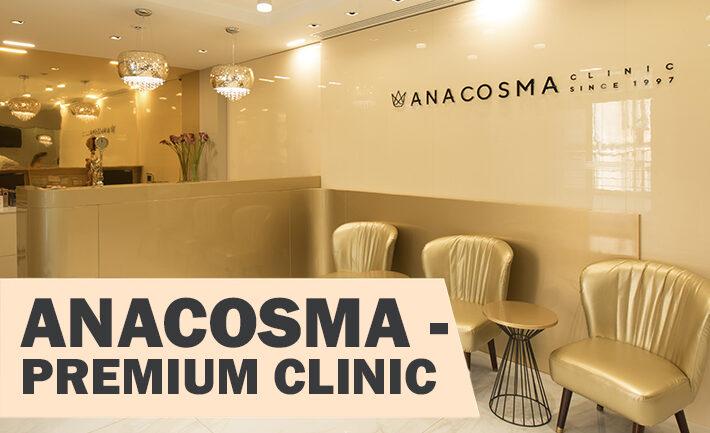